Boston Herald: "Can a Prenup be Changed After Marriage?"

A recent article from the Boston Herald discusses whether or not a premarital (prenuptial) agreement can be modified after marriage.

In the article, a woman wonders if she can modify her premarital agreement after significant changes in her life.

In Texas, you cannot modify a premarital agreement after marriage.

Read More About Boston Herald: "Can a Prenup be Changed After Marriage?"... 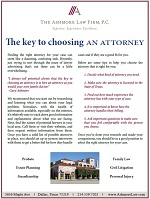