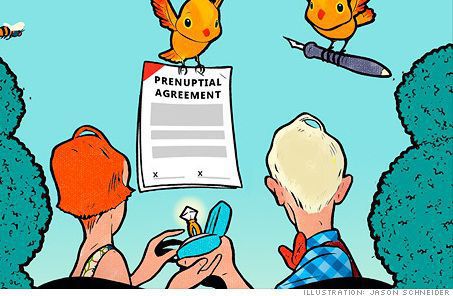 Picture this scene – a young couple sits on a park bench at the Dallas Arboretum. The boyfriend suddenly drops down on one knee and pulls out a ring from his pocket. He tells his girlfriend how much he loves her and that he wants to grow old together. Will she marry him? The girl gives an enthusiastic "YES!" The young gentleman is so happy, as he asks his next question, Hey, by the way, can you sign this prenuptial agreement?"

The above scenario may have sounded romantic, until the last sentence. While prenuptial agreements may have a bad connotation for some people, these legal documents are incredibly important and can save a lot of aggravation, in the event you ever divorce.

Really, a prenuptial agreement is a lot like auto insurance – you hope you’ll never have to use it, but you’re glad you have it when you’ve gotten into an accident!

Many people believe that it is usually one person in the relationship who wants a prenuptial agreement, but that is not always true. Sometimes both recognize that taking the time to draft this important contract can protect each person.

A young man by the name of Jason came to us to get a prenuptial agreement. He had just proposed to his girlfriend of five years, Rachel. Jason was from a very wealthy family and they were concerned about protecting the family’s assets. However, Jason wasn’t the only one who wanted to protect himself, Rachel was also interested in getting a prenuptial agreement. She didn’t have as much money as Jason, but she did own separate property that had been in her family for generations.

Jason ended up hiring us to prepare the prenuptial agreement and Rachel hired her own attorney to review it. During the process of drafting this contract, they were able to identify what each party was bringing to the marriage and how to handle property that was acquired after they became husband and wife. They even discussed how to deal with income from any of their properties.

It has now been five years and Jason and Rachel are still happily married.